“We light this chalice for the light of truth, the warmth of love,and the fire of commitment.” — A Common Chalice Lighting Phrase 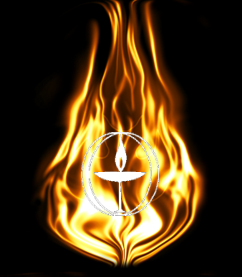 On the first Thursday in August 1801, the most famous and likely the largest camp meeting of the Second Great Awakening took place. Hosted by a Presbyterian Church at Cane Ridge, between 10,000 and 20,000 people were present at various times over the course of the next 7 days or so. The church’s minister, Barton Stone, had made certain to invite Presbyterian, Methodist, and Baptist ministers to participate, making it a very ecumenical event for the sectarian age in which it happened.

What happened there was a sort of Pentecost, with people swooning, shrieking, laughing, and crying for forgiveness under the sway of the fiery preaching they were hearing. Although Pentecostalism, complete with speaking in tongues, wouldn’t really kick off for another century, this was a very close approximation to that experience. It was also the birth of the Stone branch of what ultimately became the Stone-Campbell Movement. While the Campbellites were more staid and bookish in their ways, the Stoneites brought a passion to their faith. Many believe that it’s this difference that led to so many splits in the movement over the following decades.
While the Cane Ridge Revival was taking place, Unitarians were still counted among the Congregationalists, and not a separate denomination. The Universalist Church of America had been organized, and in a couple of years would produce a statement of faith. Neither evidently had a moment of fiery inspiration that impelled their mission. They were too busy publishing tracts and debating such important matters as whether the wicked will suffer for a period after death before being redeemed, or if they go straight to heaven. I’m not kidding…the Universalists actually fought over that, and a number left to join the Unitarians because of it.
Unitarian Universalism through the middle of the 20th century became identified strongly with Humanism. Although there were many Christian UU congregations, and some remain so to this day, most of the ‘fellowships’ that sprouted up during this period had a strongly cerebral identity, and have been pejoratively described as ‘Humanist lecture halls’ and ‘small academic cliques.’ In any case, there remained no particular moment of fire from heaven that swept through the movement.
I’ve been around churches that expected miraculous revivals. In the mid-1990s I was a regular at an United Methodist Church in Moberly, Missouri where people prayed intensely for a Third Great Awakening. The charismatic (theologically, not personally!) pastor said it should happen ‘any day now’ because we were ‘overdue.’ Some believed the ‘Toronto Blessing’ was a precursor for a major revival. So far as I know, that hasn’t happened. In any case, sense of expectation among parishioners at that church in Moberly was high and infectious.
Although Unitarian Universalist congregations nowadays are more open to ‘spirituality,’ you won’t find us doing revivals or calling down the ‘the Spirit of God’ to make us speak in tongues, and I think that’s a good thing. Emotion for the sake of emotion isn’t going to get us anywhere, and this sort of worship service is often used to get people into a vulnerable, suggestable state and manipulate them. At the same time, I do think we could use more upbeat services.
Earlier this year at Beacon Unitarian Universalist Congregation we had a guest band play during our two morning services. I was in attendance at the second service, and was amazed at the enthusiasm I witnessed. People sang, danced in place, clapped their hands to the music, and did some gestures that customarily go along with a song or two. These UUs are not part of the ‘frozen chosen,’ and it resembled what I saw while organizing with Sunday Assembly NYC. Chapters of Sunday Assembly typically do sing-alongs to pop music. Some guests said that they came specifically for that reason. These were atheists, agnostics, Humanists, Freethinkers, Skeptics, and ‘Nones’ who wanted to celebrate life.
There has to be more to it that just having a good time, though. If that were all it was, we could go to nightclubs or sporting events to get ourselves worked up. In religious gatherings there has to be a deeper connection to a shared values, a common mission, and a sense of both community and wonder. As we come together we rejoice in what’s good, lament what should not be, and stand in awe of the majesty of the universe in which we live.
Will Unitarian Universalism ever experience this kind of revival? Anything is possible, but I don’t see what long-term difference it would make. The descendants of those Stoneite churches inspired by the Cane Ridge Revival are largely very different from their forbearers. Enthusiasm cools with the passage of time, and even more so through the generations. Although the Second Great Awakening brought many new congregations into existence, and advanced new denominations, that was quite a long time ago. Although there are lasting effects, the spirit-filled experience can’t be bottled and passed along.
What I do see is the light of truth, warmth of love, and the fire of commitment in the actions of Unitarian Universalists who march for marriage equality, protest in places of power for our environment, and subject themselves to arrest at the border while standing up for immigrants. There is a blaze burning in the hearts and minds of these UUs, and I think it could be only a matter of time before it becomes a wildfire tearing through injustice…if only we can break down and break free of the systems of oppression among ourselves that hold us back.

“When the fire of commitment sets our mind and soul ablaze When our hunger and our passion meet to call us on our way When we live with deep assurance of the flame that burns within, Then our promise finds fulfillment and our future can begin.” - Lyrics of the UU hymn “Fire of Commitment”, by Jason Shelton

Posted by Adam Gonnerman at 5:13 PM