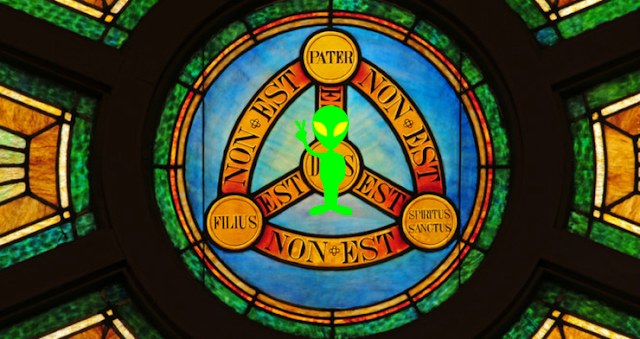 C.S. Lewis, the noted Christian apologist of the early to mid-20th century, struggled mightily to explain how the doctrine of God in Christ could be compatible with the possibility of sentient extraterrestrial life. He seemed to conceive of the Earth as the only ‘fallen’ world, describing it in fiction as ‘The Silent Planet.’ He also speculated that if another world were to fall into sin, a somehow greater atonement would be required. This was a question that lingered in the back of my mind throughout the time I was a Christian, and it seriously undermines the accepted orthodoxy that includes the Trinity, a single Incarnation, and some variety of substitutionary atonement.
The Trinity as a doctrine appears rather simple on the surface, but when you get into the details it is downright mind-bending. Here’s how the Athanaisian Creed puts it:

Whoever desires to be saved should above all hold to the catholic faith.

Anyone who does not keep it whole and unbroken will doubtless perish eternally.

Now this is the catholic faith:

That we worship one God in trinity and the trinity in unity, neither blending their persons nor dividing their essence. For the person of the Father is a distinct person, the person of the Son is another, and that of the Holy Spirit still another.But the divinity of the Father, Son, and Holy Spirit is one, their glory equal, their majesty coeternal.

Thus the Father is God, the Son is God, the Holy Spirit is God. Yet there are not three gods; there is but one God.

Thus the Father is Lord, the Son is Lord, the Holy Spirit is Lord. Yet there are not three lords; there is but one Lord.

Just as Christian truth compels us to confess each person individually as both God and Lord, so catholic religion forbids us to say that there are three gods or lords.

Anyone then who desires to be saved should think thus about the trinity.

That all boils down to God being Father, Son, and Holy Spirit as one Being but three Persons, but not three separate gods (that would be tritheism, essentially the viewpoint of the Church of Jesus Christ of Latter-Day Saints, though they still call it a trinity).That same creed then goes on to be just about as specific and detailed about the Incarnation:

But it is necessary for eternal salvation that one also believe in the incarnation of our Lord Jesus Christ faithfully.

Now this is the true faith:

That we believe and confess that our Lord Jesus Christ, God’s Son, is both God and human, equally.

Although he is God and human, yet Christ is not two, but one. He is one, however,not by his divinity being turned into flesh, but by God’s taking humanity to himself. He is one, certainly not by the blending of his essence, but by the unity of his person. For just as one human is both rational soul and flesh, so too the one Christ is both God and human.

He suffered for our salvation; he descended to hell; he arose from the dead; he ascended to heaven; he is seated at the Father’s right hand; from there he will come to judge the living and the dead. At his coming all people will arise bodily and give an accounting of their own deeds. Those who have done good will enter eternal life, and those who have done evil will enter eternal fire.

This is the catholic faith: one cannot be saved without believing it firmly and faithfully.

Again, to simplify, this means that Jesus was and is 100% God and 100% human, not some sort of half-god, half-human hybrid like Hercules.
How all of the above bears on the topic of sentient extraterrestrial life is simply to be found in the particularity of these doctrines. Christianity teaches that there is only one God and one Incarnation of that God. Because God the Son became fully Human in Jesus, that would give the human species a unique claim to God above any other sentient species in the universe. Further, were any other species to fall into sin as we were said to have done, presumably an Incarnation along the lines of what we got with Jesus would be required to save them as well. We would thus end up with a Trinitarian God with the Son being 100% God, 100% human, and 100% whatever other species that need saving might be out there. A believer might argue that with God all things are possible, but surely a vast multitude of the Savior in countless bodies goes beyond the limits of credulity to accept.
Then again, what do I know? People will believe some pretty crazy things.
The last lines of the Athanasian Creed bring up another challenging point: Resurrection and Judgment. The Bible describes New Heavens and New Earth being brought about through the resurrection and judgement of the living and dead. This is a cosmic event, not localized to our world alone. So, who’s timescale will that be on? How would redemption for all sentient species throughout the approximately 10 trillion galaxies in our universe actually be lined up to work?
I’d like to offer a couple of solutions here.
First, from a Unitarian Universalist Christian perspective, one could say that there is one God who is not a Trinity and that Jesus was a regular human who was exalted by God through adoption as his son, possibly at his baptism. The death on the cross was not substitutionary or something of the like, but rather an example of extreme self-sacrifice that confronted and exposed the temporal powers that be. Jesus is the quintessential archetype of someone refusing to be a victim, and instead obtaining victory through his apparent defeat. In his death we see the ultimate weakness of earthly powers exposed, as they only maintain power through violence and death. If death is no longer feared, they lose their power. As for resurrection, judgement, and a renewed creation, these can be reinterpreted as metaphorical and serving as inspiration for the creation of Beloved Community. Should there be sentient extraterrestrials with whom we come into contact, cognitive dissonance can be mitigated to a great deal by this more expansive understanding.
Second, from a Humanist perspective, we can simply accept that the entire structure of Christian theology was contrived by people attempting to rationalize their beliefs based on what they found in certain texts that became the Bible that we now have. There are no gods, there may or may not have been a historical Jesus, and humans are not fallen sinners but rather risen apes. We have a great deal to do to overcome our less-desirable and even at times destructive tendencies, and it’s entirely up to us to work through it because no one is coming to save us from ourselves. If we ever encounter sentient life beyond our world, it won’t be a surprise.
While the first option above may be prettier from a certain angle, I find the second far more likely. Either one would work better than traditional Christian doctrine in the face of the discovery of sentient extraterrestrial life.

Posted by Adam Gonnerman at 8:00 AM